Customer reviews. Overall Reviews:. Recent Reviews:. Review Type. Date Range. To view reviews within a date range, please click and drag a selection on a graph above or click on a specific bar. Show graph. Off-topic Review Activity. When enabled, off-topic review activity will be filtered out.

I really enjoyed the game itself, maybe I can try to play it all in one session on some weekend, but I have no idea how much time that would take. Manveru, did you actually save the game? It doesn't autosave for you and the save mechanic is a bit clumsy. Then you'll see a short description of your progress point in the save slot. No way could you play this in one long session.

Zazazu: Yeah, I tried saving again, I can click on any slot and hit the save button, it will tell me that the game is saved but the slot never changes. OK, I changed the global flash settings, cleared out all the stored stuff, increased storage settings, and now I can save On to slay some more bushes and molest goo!

I'm not going to be playing this game something about the innuendos but I just have to ask, is she holding a pink Nintendo DS in that picture? Weird Oregonian Yes she is. All three characters have a set of idle animations. There are plenty of references to modern topics, including global warming and the BP oil spill.

Dear, me, could you possible make the game sound more juvenile?

It's pretty mild by anyone's standards, and more to the point, has tongue wedged firmly in cheek. I even bet ur a juvenile male. I agree with joye's assessment. The humor can be slightly annoying, but it seems like a pretty solid game, and the developers clearly put a lot of time and thought into every detail of it. Actually, if you check You have to, I believe, click her breasts 10 time Now it's just like any other RPG, right? I really enjoyed this game. You keep upgrading equipment, unlocking skills, and finding treasure up until the end.

The leveling mechanics really worked well too. You have to unlock all medals to get past death in the volcano area. This includes beating the game on epic difficulty and getting a high score in all minigames. I was disappointed because you don't get any new equipment or skills in the bonus area. It wasn't really worth going through the game a second time on epic difficulty. The Tundra Mammoth was overpowered, in my opinion. I lost two days of my life to this game. And that was on easy mode, just trying to get three out of four Kong badges.

Great game, but now I'm going to be pulling all-nighters getting the work done I was supposed to do yesterday. Also, I wish it would have been much clearer what counted as a "physical" attack and what counted as "magical. It's annoying because it's so easy to fix. For those having problems with the mammoth, the poison skill of Matt is pretty effective against it.

I tried the mammoth twice and the first time i obviously failed because of the summons, the heals and just about every aspect of the fight, but once i put the poison on the mammoth it pretty much defeated itself while i just kept up healing and dealt with the trash mobs on the side. It's a great game, though it's clear a significant amount of the art work was borrowed from the previous games not a bad thing in this case.

Gunning for the medal, I played on normal difficulty instead of easy, as I usually play. That was a bad idea, since the game got very difficult later on took me a while to figure out a working strategy. Regen is probably the best spell in the game; it negates freeze, applies to your whole team, and heals a good amount. I just spent 46 hours playing this.

I really enjoyed it. It filled in the time I was at work when I couldn't play Dragon Age. 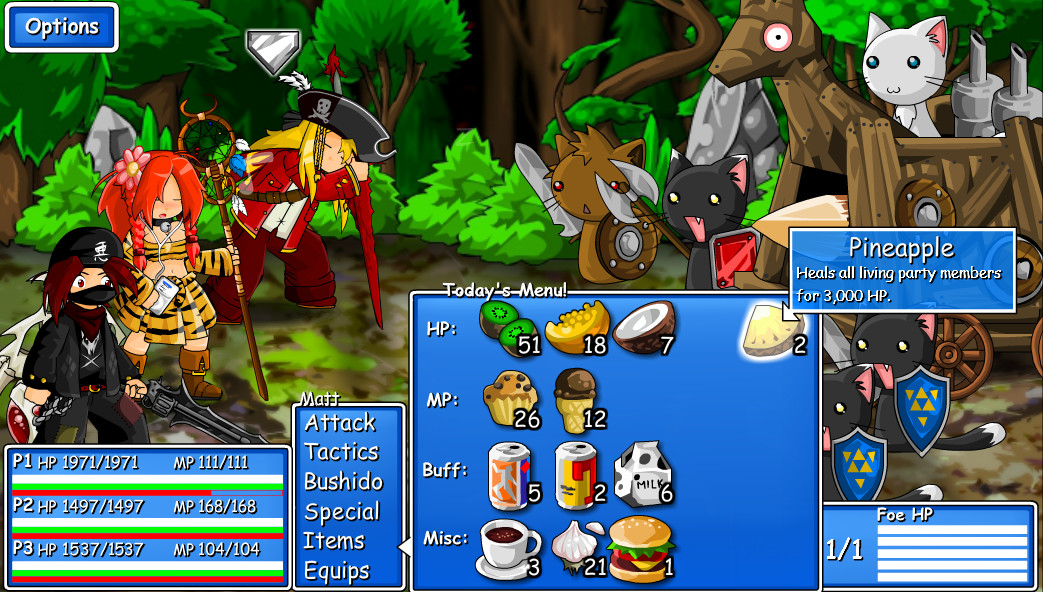 I love these games. My only complaint is the fact that there's not a 4th one right now. Going back and playing again with all your leveled up stuff seems hollow. Higher difficulty it is, then. I was not too taken aback by the sense of humor in the game, but then again, I'm a pretty chill dude. Sure there are some parts that were worse than others, but I have no 'but point' Ok, moving on: Problems with saving. I haven't had any problems with this until my computer crashed.

I lost about 18 hours of game time. Little did I know that that wasn't going to be the worst of it. The game refuses to save for me now. At all. I click the slot, click save, it says 'game saved' but the slot is still labled as 'empty'. Occasionally it will successfully save, but doesn't last. When I power down my computer and then come back later, my game is not there. There's a thing on the site advertised in the game that says to right click in the game where you go to mute the sounds, etc , go to settings, and set it to store unlimited information. This did not work for me, however.

Any help at all will be appreciated. Unless you're rude or tell me to right click in the game, go to settings, and set it to store unlimited information. We already got that base covered. Tell me, people- and be honest- has anyone here managed NOT to click the cute little blobby things at the loading screen??

I haven't even started playing the main game, yet, and I already love it! Man, I was worried Kupo wasn't gonna make it. Two words: Good. I'm glad it was worth the wait, though. Hey, does anyone know what that red stat bar is for? The red is the "damage taken" meter for those "limit break" attacks. If the red bar fills up completely, you can use those attacks.

You should have these buffs already, if not, see the walkthrough. Forge the white mage armor into level five white mage armor. Although you won't have ice resistance, you will have freeze resistance. As long as your mage is unfrozen, she can release your other two characters. Also, level 5 white mage armor randomly casts regeneration at the end of the turn making it a must-have. So stock up on those cupcakes and get forging. With max poison level, 9 you can shave off 10k hp from the mammoth every turn. Use your favorite combo. When the 'Cursed Trinity' starts their attack, none of the three protagonists are in any defensible condition right after Ancient Monolith's 'Giga Impact Beam.

I kind of cheated. You can flee those battles and walk past them. Natalie gets a wand called the Death Bringer. This is your best friend ever. It's hard to give up your healer for a turn, but if you use a regular attack, you can inflict doom on most of the creatures in the game.

This become really important in Epic mode, where you run into monsters that heal and regen constantly due to poison resistance. You can whap them once with the wand, they get one turn, then they die the next. It even works against enemies that are resistant to death although sometimes they just take about 20k damage instead of dying. Well the archaeologist mentiones that it looks like something is supposed to go on the pillars.

You'll notice a few red orbs scattered around sitting on top of other pillars, and you can pick them up. I'll leave the rest for you to figure out. I'm level 20, 21, or 22 and have between badges and have gotten the gear from those areas. I need help. In general, Natalie never freezes, knows every spell not max level though and I can't stinking poison the mammoth even with the Nuke Limit Break!!!

Magical Attacks are when an element touches the opponent. Lucky star, Healing, etc. Berserk- Special because you use the Magic circles on a player. Does that mean the damage done is Magical? It's like using Temper but you are limited on using only your Normal Attack. I have been playing this game for so long. It turns out that now, I can't load the game on Newgrounds.

It keeps getting stuck at some random percentage number. This game was a hell of a lot of fun, and as an RPG is actually better designed and executed than it's lighthearted premise would imply. I'd not only love to see a sequel, I'd very much like to see a "serious" RPG from the same crew, because the mechanics are more than good enough to support it. The only thing I would like to see that this lacked IMO was the option of more characters, to be able to swap out and build a party to suit one's own tastes. I for one love to build all-female parties when I can, and the option to do that here would be awesome.

Guys, I need some help here. I really enjoy the game but after playing a few hours I am stuck with all arrow and wasd keys frozen Obviously they work just fine in other programs, and I can perform other tasks in the game as well. I'm on a McBook. Any clue? I cannot move the characters, but can access everything else. This is an RPG. So, you can grind levels and then beat the living crap out of the Protector. However, you don't need to go overboard with that. And make sure to take out the Holy and Shock runes he summons, and make sure to keep any healers out of the fight on his side.

Hope this helps you. Where is the upgrade button?

I've tried to learn new skills, have the right amount of ability points but there is no upgrade button. I didn't have a lot of trouble on Hard, but Epic is destroying me. I freaking love this game. And honestly, while I thought the battles, skills, medals and overall gameplay were wonderfully balanced, beat normal, doing epic the freaking monoliths were demons.

I almost had more trouble beating the cosmic monolith before Akron than actually fighting Akron. And that was only because there was a CM in the Akron fight. HUGE bit of advice, guys. Use your strongest spells only on Akron, or only use all-hits when his claw-things have full health.